We first drove to have a quick look at Wonga Beach, which I’d read was a good site for Beach Thick-knee. No such luck, although I picked up Eastern Osprey, Sacred Kingfisher, Whimbrel, Black Kite, Little Egret and Straw-necked Ibis here, along with Striated Heron along the beach a few miles further south. As we drove on, we realised that lots of the birds we’d taken for granted around Cairns had been largely or entirely absent from Daintree; clearly things like Magpie-larks, Masked Lapwing and Straw-necked Ibis are highly associated with human-dominated habitats and missing from thick rainforest. North of Mossman we stopped to finally confirm that some of the kingfishers on the wires were Forest Kingfisher as I’d been suspecting. Duncan also found us our first confirmed Little Pied Cormorant by the river on entering Mossman.

We stocked up on supplies at the Mossman supermarket, then headed inland on the windy climbing road over the hills, and came to our next campsite – Kingfisher Park – before too long. This is a small, quiet site, situated in a remnant patch of rainforest and run by (and largely for, it would appear) birders. As we pulled into the campsite grounds, we flushed an Emerald Dove from the side of the track. We went to chat to Carol and Andrew who run the site and they gave us a bit of local gen, although I was getting a bit distracted by the bird table which produced three more new species for me – numerous Chestnut-breasted Mannikins and Red-browed Finches and a few Macleay’s Honeyeaters. We pitched our tents under a large tree which was in blossom and full of birds – mostly hard to pick out but including my first Scarlet Honeyeaters as well as White-throated Honeyeater and many Rainbow Lorikeets. Both Northern and Grey Fantails were in evidence around the tent.

As dusk was coming on, we decided to go to look for the Platypus that had been showing at times along the creek at the edge of the campground. On the way we did have to check out the Papuan Frogmouths – we we found one exactly where Carol had told us, zero chance we’d have seen it otherwise as pretty well hidden. Nice views of Pale-lemon Robin here too, and a Wompoo Fruit-dove was calling. A really nice find by Duncan near the stream was a Boyd’s Forest Dragon which crossed the path and then stood still for a while for us all to enjoy, although the gloom of the forest didn’t help with photography. We then sat for about 40 minutes waiting for a Platypus to show. Two new birds came down to drink/bathe – Yellow-faced Honeyeater and the excellent Grey-headed Robin, and we also noted Pied and Spectacled Monarchs here too. No sign of the monotreme though (although we later heard that someone had it in torchlight after we left!) We walked back, finally getting a reasonable view of the Red-legged Pademelons (small wallabies). There were also various rat-like creatures around which – on discussion with others – may have been a mixture of Fawn-footed Melamys, Bush Rat and perhaps an Antechinus sp. After dinner though we did get a more concrete mammal ID with a splendid Northern Brown Bandicoot feeding under the bird feeders by torchlight. 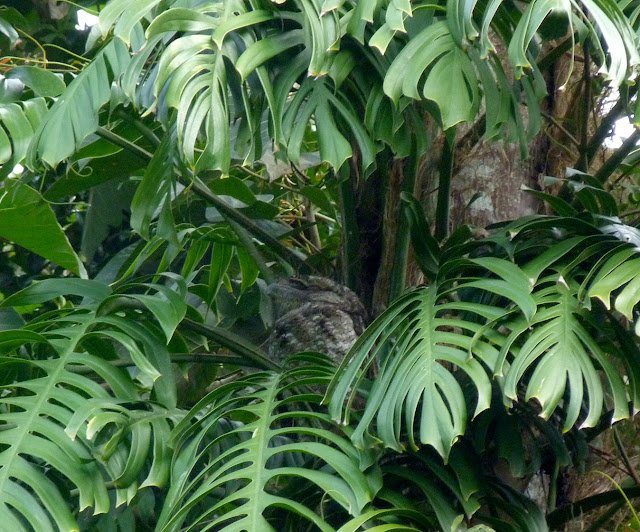 Woken by the ridiculously loud Laughing Kookaburras on site. Had a walk around the campground, with the main target being Noisy Pittas that had been seen recently (but quiet at this time of year). No such luck, but good to see Grey-headed and Pale-lemon Robins, Papuan Frogmouths (two visible this morning), Topknot Pigeons (flying over), Emerald Dove, Metallic Starling and so on. Back at the tent, there was a stunning White-cheeked Honeyeater, alongside some Scaly-breasted Lorikeets. I thought I might have seen Rufous-throated Honeyeater but Carole sorted me out with it being an immature Scarlet. She also helpfully pointed out that not all the Yellow-spotted Honeyeaters here were that species, and that the one in front of me was actually Lewin’s Honeyeater – another new one. 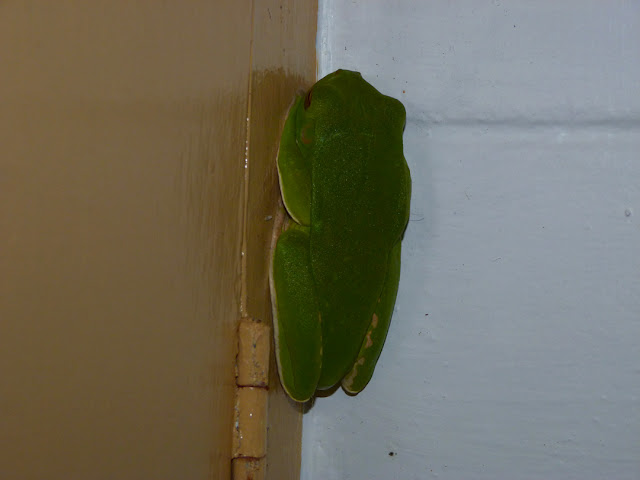 After breakfast, we drove up to Mount Lewis, passing ponds by the road where we didn’t stop but there was clearly identifiable Hardhead alongside the egrets and ibises. Splendid views of Forest Kingfisher and Laughing Kookaburra at the base of the track too, then we wound our way up for about 10 km, parking by the famous parrotfinch clearing. It was the wrong time of year for the parrotfinches to be up here – more about this species later. There is a well-walked forest trail from this clearing but first we thought we might just walk further along the road for a while to see if we could pick anything up like that. This turned out to be a poor strategy as we saw very little indeed for a km or two, except for Grey Fantail, Topknot Pigeon and Bridled Honeyeater (Mt Lewis was good for this species, particularly when I got the hang of the calls). The only new bird along here was frustratingly poor views of Brown Cuckoo-dove. I was getting a bit despondent at failing to find any of the real specialities of the area. We returned to the car for a drink then took the track that we should have taken in the first place, and this turned out to be much better. Almost straightaway we bumped into a stunning Eastern Spinebill (my only one of the trip); indeed Carole had said that the only honeyeaters we’d see up Mt Lewis were the spinebill plus Bridled and Lewin’s, which was spot on. We met an American couple and their guide coming the other way, who didn’t seem to be having much luck. However, shortly after passing them, we had close views of Mountain Thornbill, then Atherton Scrubwren, then the splendid little Yellow-throated Scrubwren (which reminded me of a Common Yellowthroat). A bit further along the track we heard rustling in the undergrowth and instead of it being (as usual) Orange-footed Scrubfowl or Brush Turkey (both of which were present), we were delighted to find a small group fo Chowchillas, another local endemic. We stopped for a little while when we got to the dam – Tom and Trudy managed a brief, gripping view of a Yellow-breasted Boatbill which I missed. I did pick out my first Rufous Whistler here, and puzzled for a while over some small birds that I failed to name (suspect they may have been Brown Gerygone in retrospect). We decided to continue even further along this trail, looking carefully for snakes all the time, and Duncan’s sharp eyes bagged us another local mega, a Fernwren quietly searching through the leaf litter, which I think I’d almost certainly have missed alone. We turned round at this point and wandered back, getting slightly better views of Spotted Catbird than I’d had up til now. So in the end, a very successful walk here. 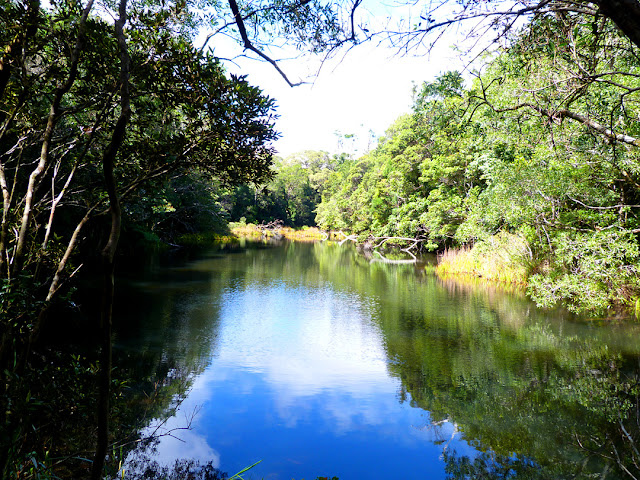 The dam along the track at Mt Lewis

We had lunch at the car then decided to go somewhere else for the afternoon. We descended the mountain trail and headed of a short distance west, to try for Blue-faced Parrotfinch at a stakeout we’d been told about at the campsite; a small trail leading off the main road opposite Sides Road. The finches are apparently down at this lower altitude as it was winter (brr, so cold – not!) We failed to find them, sadly, but notched up a few things – Little Shrikethrush, White-cheeked Honeyeater, Red-browed Finch, a female Lovely Fairy Wren and two brief raptors which might have been both Brown Goshawk and Collared Sparrowhawk – I was struggling to get to grips with either of these so far. We gave up on the finches and drove down the road to the village (“town”?!) of Mt Molloy where we found a roadside cafe to have a drink and sit-down. In fact, just entering the slightly drier country here was productive for birds, with four new species seen in rapid succession from by the cafe; a single Red-winged Parrot, a territorial Great Bowerbird, several ‘in-your-face’ Blue-faced Honeyeaters and a single Torresian Crow. Not a lot else to do in Mt Molloy though, so we headed back and had a quick stop at the delightfully-named Abbatoir Swamp. There wasn’t much water in evidence and birds were quite thin on the ground here, but I did manage to clinch Tree Martin at last (having seen a number of candidates from the roadside previously) and also the fairly dull Brown-backed Honeyeater.

Back at Kingfisher Park, we were chatting with Carol when Trudy spotted an absolutely stunning Yellow-breasted Boatbill which landed in the tree next to us; it then settled down and appeared to be going to roost. Really pleased to get this one back. We then had another attempt for the Platypus, and failed again, seeing little except Red-legged Pademelons and one Long-billed Scrubwren. We gave up when it got dark (after, in fact) and returned to cook our dinner, chatting to a couple of other camp guests. I had a wander around a bit later and managed to hear the local Eastern Barn Owl, but not the Lesser Sooty Owl that was apparently present. 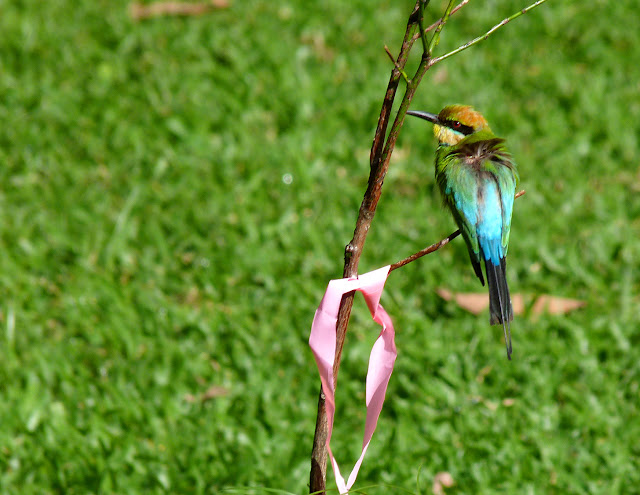 Duncan and I got up early again – he went to look for the Platypus and succeeded, a well-deserved bit of grippage! I focused on trying to find Noisy Pitta and failed – pah. I did try to tune into some of the main bird calls, and Andrew later helped confirm that many were Grey Whistler, and we then spotted one high in a tree. Otherwise, birds included Spectacled Monarch, Little Shrikethrush, Long-billed Scrubwren, Scaly-breasted Lorikeet, Papuan Frogmouth, Blue-faced Honeyeater and another Yellow-breasted Boatbill. We packed up, and had a post-breakfast last ditch attempt to see Platypus where we failed as expected, although were pleased to see a Water Dragon. 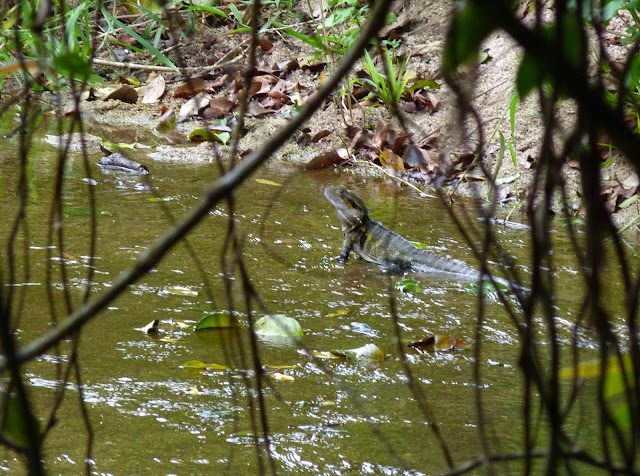 As we drove away, we allowed ourselves a 15-min stop at the parrotfinch site at Sides Road. Failed again, although the birds were seen by someone else this morning (seen on back of camera!) I did manage one new bird though, with a nice Fairy Gerygone seen, as well as Brown-backed Honeyeater, Silvereye and Spectacled Monarch. Then off to Mount Molloy and south towards the Atherton Tablelands.