We been saving up for Australia as a last big family holiday before Tom went to university and Duncan started sixth form and had settled on a three-week, two-centre trip, based out of the two northern cities of Cairns and Darwin. This is a somewhat wildlife-focused account of this family holiday. (Or a slightly family-focused birding trip report. You decide.) We left Heathrow about 2230 with Philippines Airlines, which I have to say was somewhat tattier than I’d expected for a long-haul flight. Didn’t sleep brilliantly, waking as we entered Chinese airspace. We landed at Manila at about 1900, sadly in the dark so no birds here. Manila airport also not the swishest ever. Our departure for Cairns was delayed by 2 hours but eventually we made it, stepping out into Australia for the first time about 0830.

First bird of the trip was Welcome Swallow seen from the plane windows whilst taxiing. Arrival was straightforward. We left the international terminal building to walk to the domestic one where the car hire was based. In the intervening 500m of ‘airport-habitat’ I added a further ten species – new country birding at its most exciting! Although three were introduced species (Spotted Dove, Common Myna, House Sparrow), there were also my first sightings of Peaceful (or “fun-size”) Dove, White-breasted Woodswallow,  Bar-shouldered Dove, Magpie-lark, Willie (or “Wilhelm von..” ) Wagtail, Rainbow Bee-eater and Rainbow Lorikeet. Two birds with ‘Rainbow’ in their name in the first few minutes, can’t be bad! 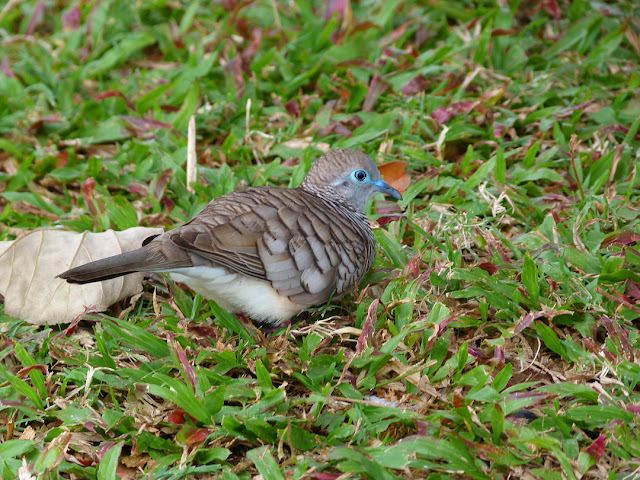 We had a coffee to settle ourselves, then drove the short distance to the mangrove boardwalk (there are two, but the right-hand one was closed for repairs). Not a huge variety of birds apparent to the Oz-newbie, but I did manage to see my first honeyeater of many – this one the very common Brown Honeyeater with a distinctive song I came to recognise quite quickly. There was also a nice pair of Olive-backed Sunbirds, a few Australian White Ibis and a small flock of Metallic Starlings flew over. Best of all though was a brief view of a pair of Lovely Fairy-wrens, the male being quite exquisite. Lots of mudskippers, cool little crabs and the sounds of ‘snapping shrimps’. 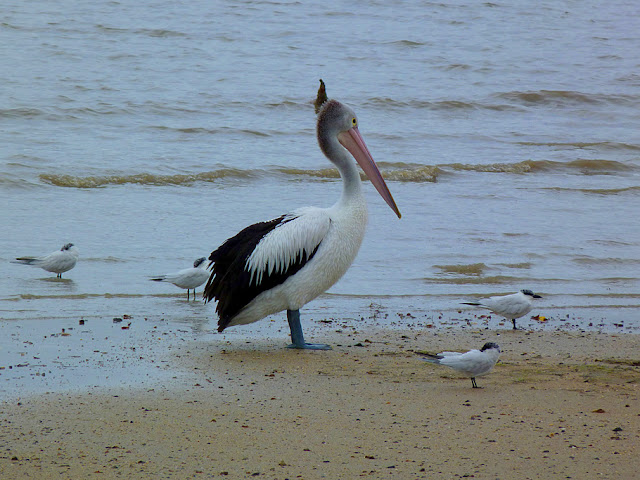 We then drove into Cairns, passing our first Masked Lapwings and Straw-necked Ibises, followed by the incongruous (to us, initially) sight of a Sulphur-crested Cockatoo sat on a park goalpost – bigger birds than anticipated and throughout the beginning of the trip, particularly in flight they often caused momentary confusion by looking like egrets! We parked at the northern end of the esplanade; Trudy had a wander to look for a shop, Duncan had a snooze and Tom and I had a quick look for birds. The tide was in so no waders, but there was an Australian Pelican sat up close, surrounded by Silver Gulls and Gull-billed Terns. There were also my first Figbirds, decent numbers of Australian Swiftlets, a brief Varied Honeyeater (my only one of the trip) and best of all, a superb pair of tiny Double-eyed Fig Parrots, a real highlight. 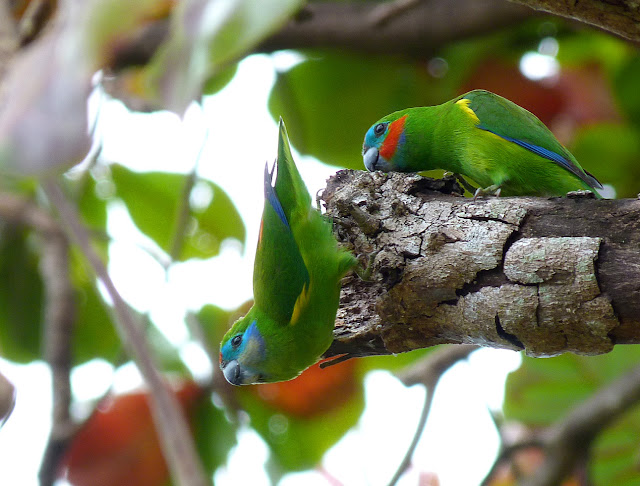 We didn’t stay too long here, but drove off to find our accommodation, which was an Airbnb we’d booked in the suburb of Woree – basic but adequate (we thought, more later....) Popped to local supermarket for supplies. We then headed over to the Centenary Lakes and had our lunch (although our body-clocks were highly confused by this stage). On the lakes were a few Magpie Geese and Pacific Black Ducks, with a single Dusky Moorhen and a flyover Raja Shelduck. Our first Orange-footed Scrubfowl and Laughing Kookaburra were seen nearby too, and we had our first of many sightings of the stunning Ulysses Swallowtail  – enormous blue butterflies. There was a nice trail through forest here, but I didn’t manage to pull out anything of note. We emerged at the Botanic Gardens which are a great introduction to the extraordinary range of vegetation of the wet tropics region, but fatigue was really kicking in now and we were struggling to stay awake every time we stopped. I semi-dozed off at one point half-way through writing the number 4! The only new bird in the gardens we managed to clinch was the (not difficult to identify) Brush Turkey, although there were also friarbirds I couldn’t get to species. 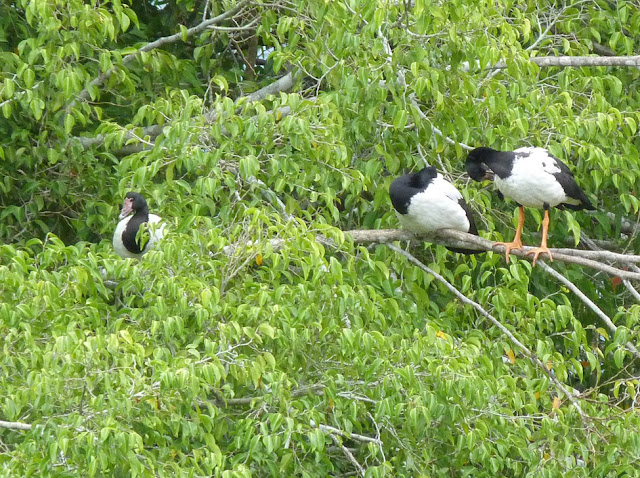 Magpie Geese, Centenary Lakes - they like to perch in trees

We returned to the car and went back for another short walk along the esplanade before dark. The family were pleased to find a free wifi spot and I watched the birds. The tide was now out and waders were present, but distant, and jetlag made it quite difficult to do them justice, but I did note Pied Oystercatcher plus Whimbrel, Greenshank, Bar-tailed Godwit, Curlew Sandpiper, Great Knot (on shape – perhaps also Red Knot?) Herons were also well represented, with White-faced Heron and a single Royal Spoonbill new for me, alongside Great and Little Egrets and a Striated Heron. A real bonus was a brief view of a Grey Goshawk hurtling along the back of the esplanade, hunting along the edge of the buildings. As dusk approached, lots of Rainbow Lorikeets and Rainbow Bee-eaters were congregating. We returned to our digs, managed to cook and eat in a zombie-like state and turned in around 2000. 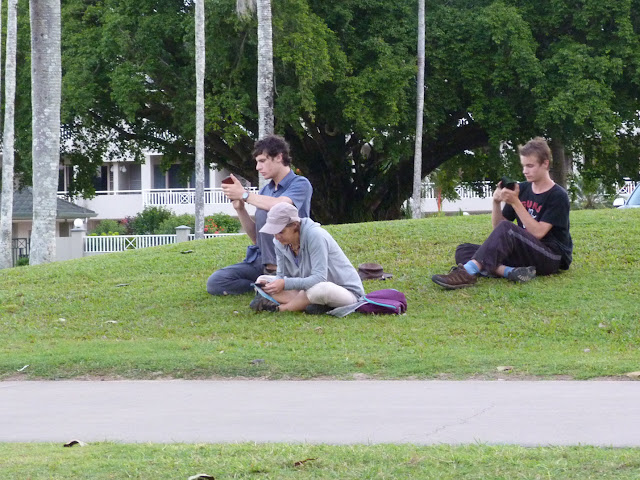 Slept til 0200, then more fitfully, hearing what I presumed were Bush Thick-knees outside. Duncan and I got up at 0630 and had a wander along the edge of the Cannon Park racecourse for an hour. There were indeed loads of Bush Thick-knees here, along with nice views of many of the previous day’s new species – lots of Sulphur-crested Cockatoos, Straw-necked Ibis, Magpie Geese, etc. New species for us here were White-throated Honeyeater, Yellow Oriole and Helmeted (now split as “Hornbill”) Friarbird. I did find the difference between Helmeted and Silver-crowned Friarbirds difficult, as the shape of the back of the bare face patch could appear to change as the birds moved their heads at different angles; moreover, friarbirds seem to seldom stay still! 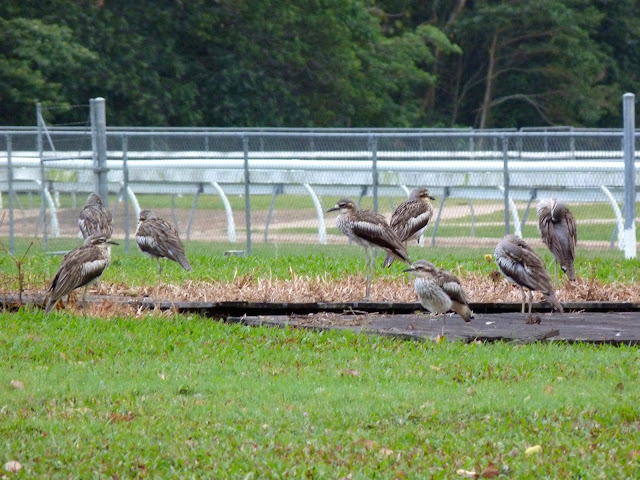 Bush Thick-knee, surprisingly common, here on the edge of a racecourse

After breakfast, we returned to the Botanic Gardens and from here, climbed a fair way up Mt Whitfield. This was pleasant, although not especially bird-filled (probably due in large part to me not having familiarity with the local bird calls – a frequent frustration!) Lots of scrubfowl and turkeys around. On the way up, the only new bird I sorted out was a male Mistletoebird (they have a song like a Coal Tit, to my ears – helped to pick up more of them over coming days). I also started to recognise another song – loud notes on a descending scale – although I didn’t work out for several more days that this was Yellow-spotted Honeyeater (worth learning if you’re coming out here!) The real highlight of the walk though was in starting to appreciate and enjoy the rainforest vegetation – the palms, cycads and ferns. For the most part, we were pretty clueless as to what we were looking at, but it was fantastic all the same! 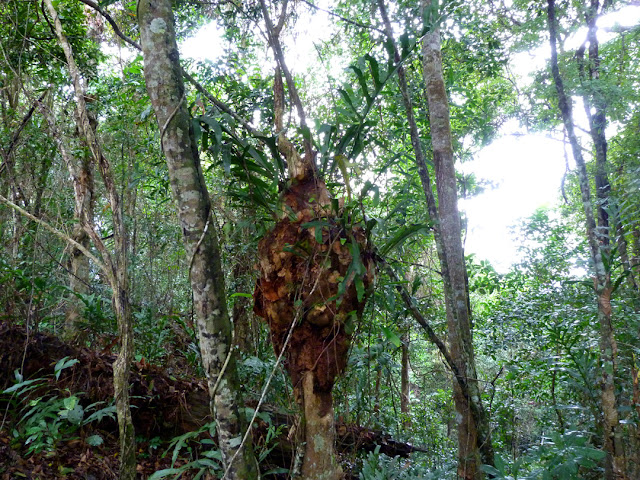 Basket Fern (Drynaria sp.?) at Mt Whitfield, impressive and common in the rainforests

We turned round about half-way to the top and came back, seeing some Nutmeg Mannikins, whilst Trudy found me my first White-bellied Cuckooshrike. Back down at the Botanic Gardens, we traced a distinctive call to a pair of Black Butcherbirds skulking in some trees, and I had a brief but distinctive view of a Pacific Baza landing in the crown of a tree before flying off. 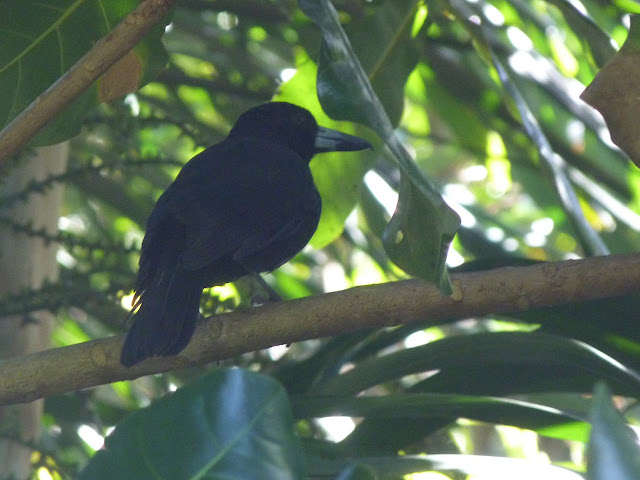 We then tried to follow up some gen that Ian had sent out about Rufous Owl in the (v small) Les Davies Park, but failed. After lunch, we parked by the southern end of the esplanade and my first Brahminy Kite flew over. We then wandered into the town and spent some time at the newly opened Cairns Museum (quite good, if you like that sort of thing). 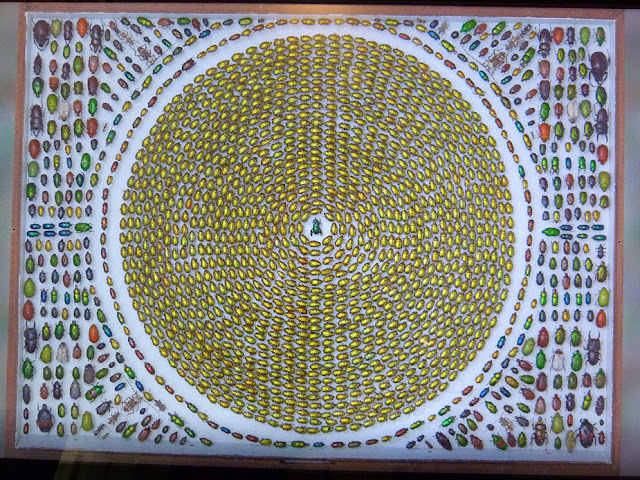 After this we returned to the esplanade and I tried again with the (again distant) waders. Eastern Curlews were easier, and I could distant tattlers that I’m assuming were Grey-tailed Tattler (largely on habitat, to be honest). There were also smaller birds that were presumably Red-necked Stints, more Great Knot and some sandplovers that I didn’t worry myself about. I did, however, find myself a splendid Double-banded Plover. This was within the range in the fieldguide, but later on chatting to a couple of locals, it turned out this was a rather good bird for the area. I found it again for them, and they kindly returned the favour by pointed out Black-fronted Dotterels and Red-capped Plovers that I’d managed to overlook. Also on the mud were my first Sacred Kingfishers and Pacific Reef Herons, along with Crested, Caspian and Gull-billed Terns and about 30 pelicans. 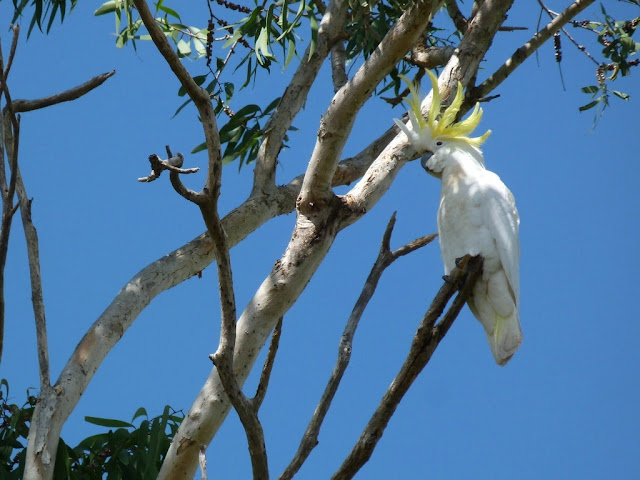 Sulphur-crested Cockatoo in Cairns - very common in most places

We walked round to the Rufous Owl fig tree by the convention centre but no luck, before we had to move on, as we’d booked to go to a two hour talk by ‘Reef Teach’ to learn more about what we might see on the barrier reef in a few days time. This was good, although ideally not to be done when jet-lagged. We then got some food, saw some Beach Thick-knees walking along the esplanade in the dark, and returned back to our flat. Worryingly, there seemed to be a party going on nearby...

The music didn’t stop all night, nor did the shouting. It appeared to be some sort of outdoor rave, and although it sounded like the police tried to move people on from time to time, it never stopped long enough for us to get to sleep. Although the boys slept through it, Trudy and I didn’t sleep at all, literally – not brilliant in our jet-lagged state. When it finally got light, I had a walk around the block and could see people still kicking around with music blaring out of car-mounted speakers. There was a club along the road, which had a sign up saying it was open til 0400, and the noise seemed to have been centred here and on the field behind. Grrr, not pleased! Anyway, I had a wander, picking up various common suburban species, adding only Nankeen Kestrel as new, although I also had a flyover Double-eyed Fig Parrot. We then packed and left. The others went into the supermarket for supplies and I managed 15 mins sleep. However, my mood lifted as we were successful on our second attempt at Les Davies Park and found the Rufous Owl high in the crown of a tree. We tracked it down thanks to a Sulphur-crested Cockatoo mobbing it – I’d suspected this the previous day but hadn’t persevered sufficiently. Anyway, a welcome pick-me-up, and we finally left Cairns with slighty higher spirits, driving north along the coast. 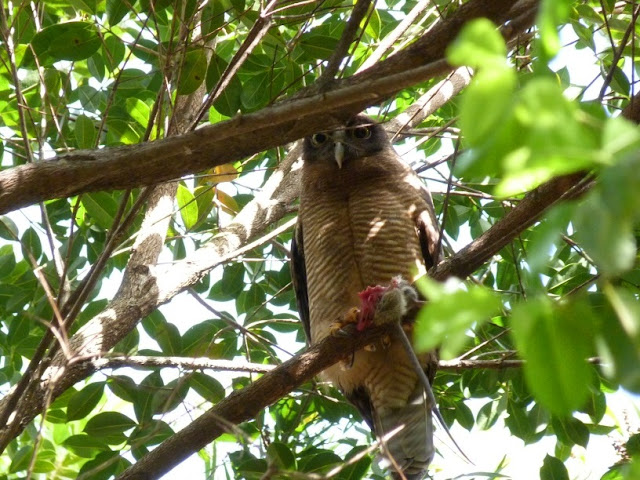