Nothing additional jotted down today, didn't start out by taking this seriously enough!

Again, didn't look particularly in garden today, but ran the moth-trap tonight with just one addition:

11. March Tubic Diurnea fagella - I'm going to try to make more use of the 'new' English names for micro-moths, although I'm not all that keen on this one. What's a tubic anyway? Urban Dictionary says it is "someone who is so fat that they have the appearance of tubes (like the Michelin man)". I don't buy that with Diurnea fagella. Anyway, a regular spring moth and one that causes confusion for beginners, because it's a "micro" but a reasonable enough size to suggest it may be a "macro".

A Saturday, so a bit more of a look around. Jotted down a few of the more obvious plants and a few insects.

12. Greater Periwinkle Vinca major - presumably this was once planted deliberately in the garden, but we've done nothing to encourage it during the 14 years we've been here, so it's wild enough. Here's a bit with a mildew on its surface, but not sure what the mildew is yet - there seem to be at least a couple of options. The plant itself has big purple flowers which I seem to have overlooked from photographing. 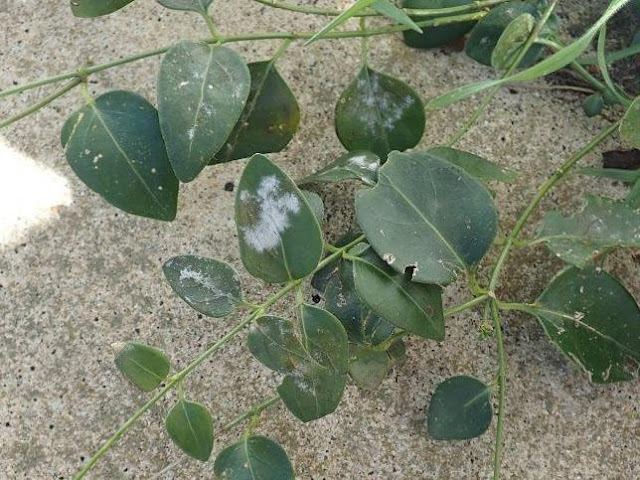 13. Cleavers Galium aparine - very common plant and can be a tiresome 'weed' at times. I like it though because it supports the first sawfly of the year (see later...) 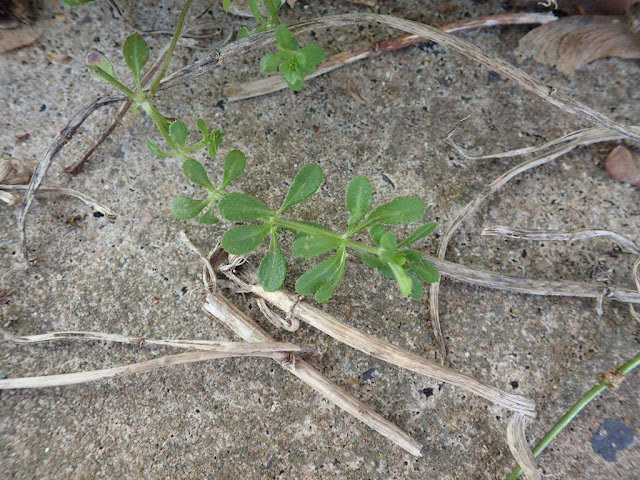 14. Great Willowherb Epilobium hirsutum - just the first developing leaves so far, but this is common in the garden (and even more so over the road on Shotesham Common). Key foodplant for everyone's favourite, the caterpillars of the Elephant Hawk-moth. 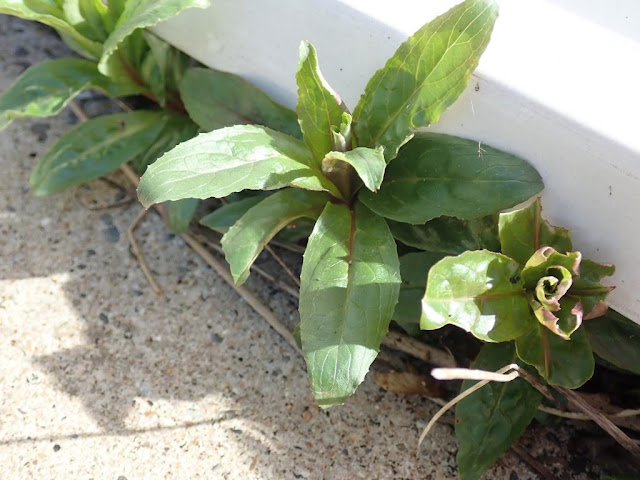 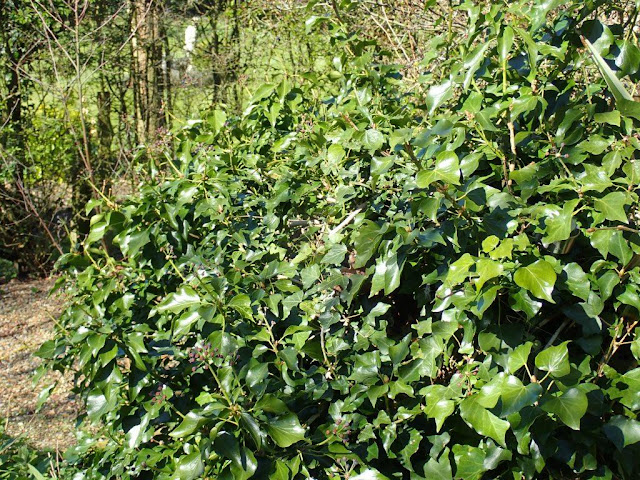 16. Yew Taxus baccata - we've got at least three yews in the garden. Presumably planted once upon a time, but these long-established native trees/shrubs in gardens always feel kinda "wild" in a way. They could conceivably be here in absence of people. Anyway, we'll have it... 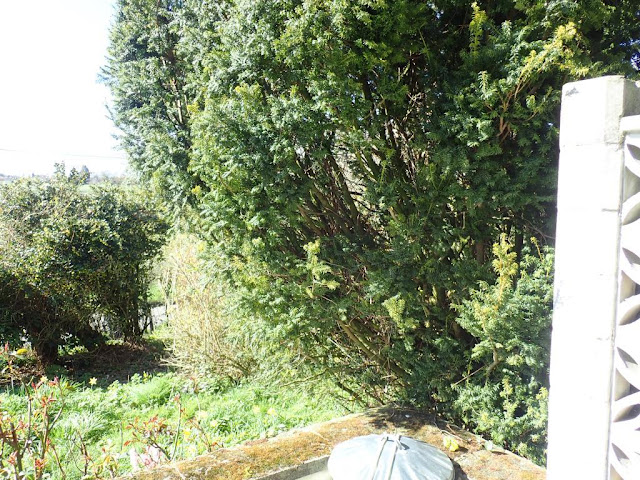 17. Groundsel Senecio vulgaris - the commonest of the Senecio species and occurs pretty much everywhere. Closer inspection can reveal the next species... 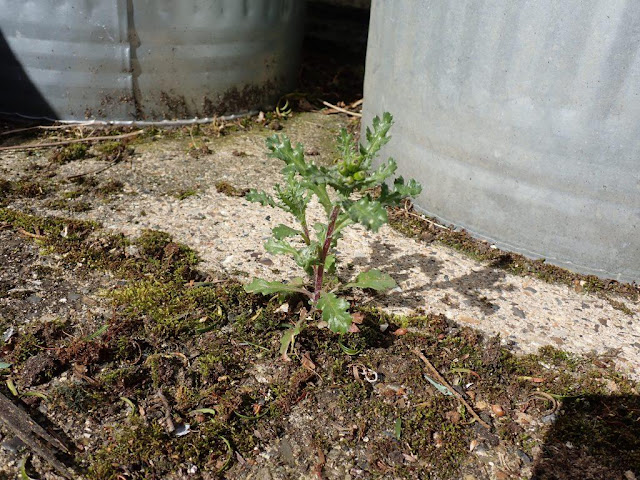 18. "Groundsel Rust" Puccinia lagenophorae - a bright orange micro-fungus that can often be found on the leaves and stems of Groundsel and related plants. 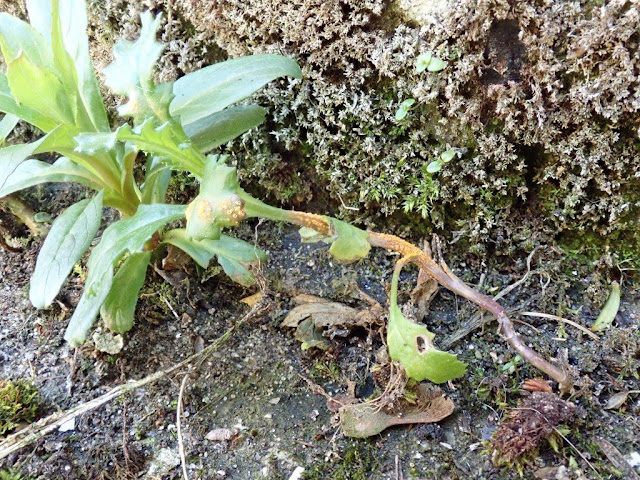 19. White Dead-nettle Lamium album - abundant in my garden, and particularly favoured by bumblebees at this time of year. Bit invasive, but we can tolerate that. 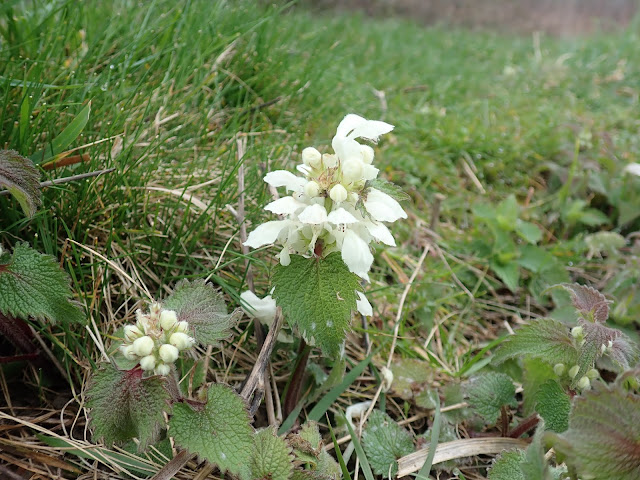 20. Hairy Bittercress Cardamine hirsutum - a small and easily overlooked crucifer. Differentiated from the very similar Wavy Bittercress by having 4 (not 6) stamens. The latter is common just over the road, so I suspect it could also be in the garden somewhere.The plant pictured here was examined carefully, and in the process I found it had some tiny aphids on it. Couldn't work out what they were though. 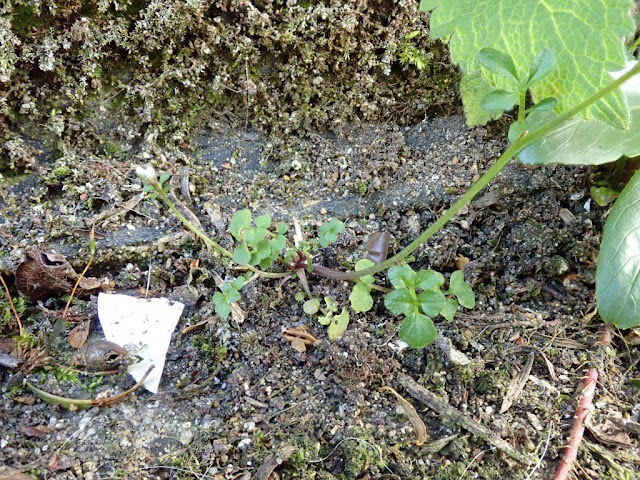 21. Feverfew Tanacetum parthenium - presumably someone (maybe us even) planted some in the garden originally, but this is a very persistent weed. All over the place, although pleasantly easy to remove if required. Nice pollinator food though in due course. 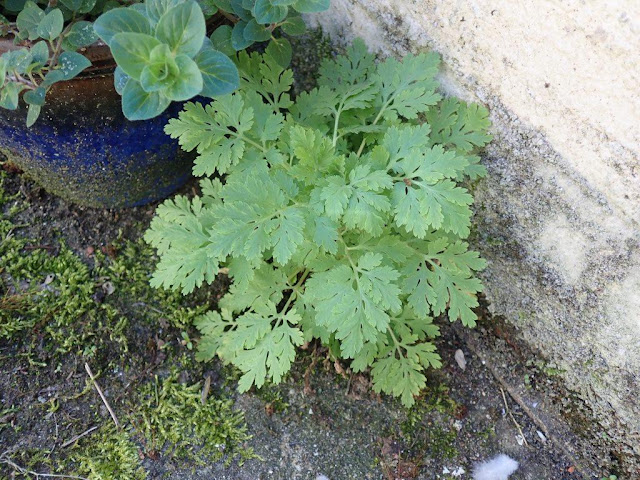 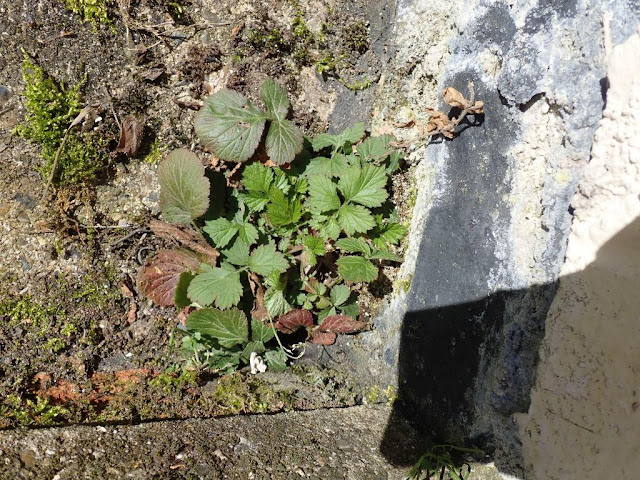 23. Petty Spurge Euphorbia peplus - another readily overlooked but very common plant, and on it I noticed...
24. "Spurge Rust" Melampsora euphorbiae - those small orange blobs on the leaves. This was a new species for me - my first COVID19 lifer from the garden (and far from the last I suspect). 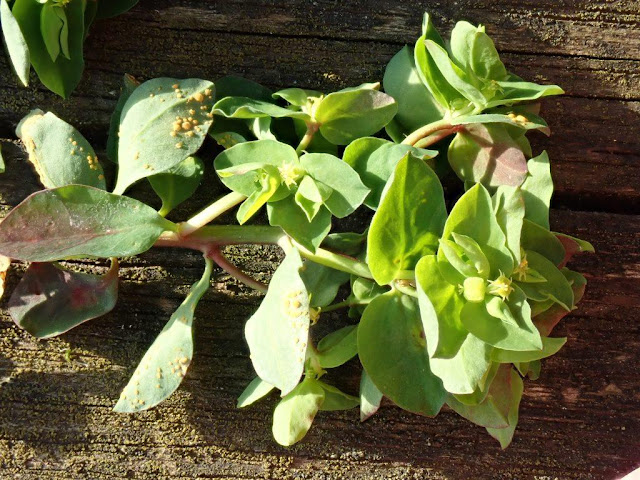 25. Dark-edged Bee-fly Bombylius major - always a highlight of the first warmer days in spring, the bee-flies appeared today. Will be around for a couple of months, holding territory in the garden and parasitising solitary bee burrows. 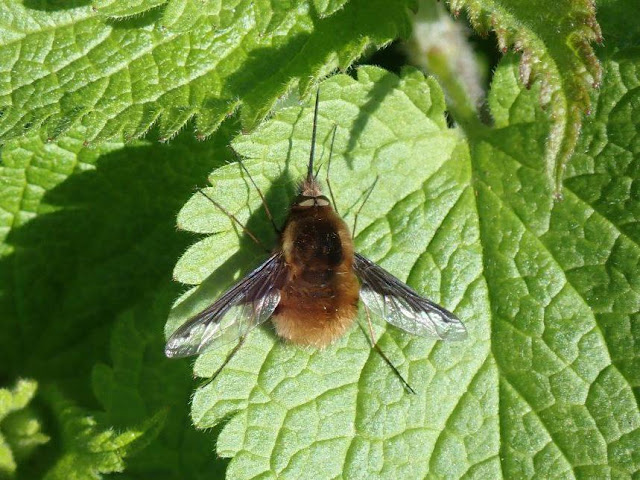 26. "Early Galium Sawfly" Aglaostigma aucupariae - often the first sawfly of the spring, and because it lays its eggs on Cleavers, can be found in many gardens. A relatively small insect (7-9 mm in length) it can be overlooked without close examination. 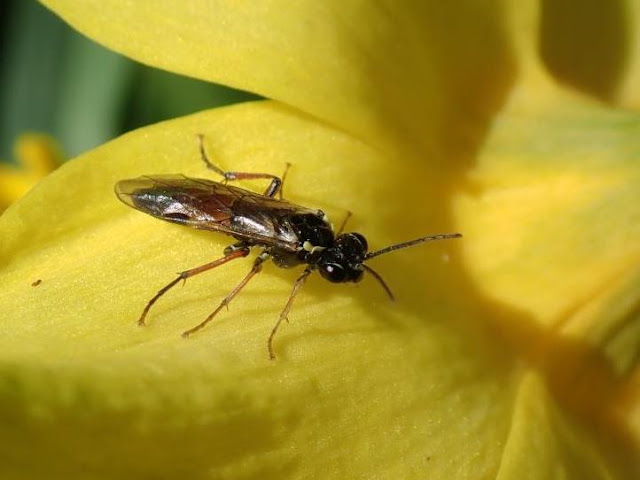 27. Early Bumblebee Bombus pratorum - regular but not usually as abundant in the garden as some of the other bumblebees. No photo of this one, bees are often really hard to get decent photos of (for me at least)

28. "Common Dronefly" Eristalis tenax - a very common hoverfly, the size of a honeybee and a good mimic of such.

29. "Tapered Dronefly" Eristalis pertinax - also common in spring, distinguished from tenax by its pale yellow front feet (tarsi). I'd not noticed this suggested English name before for this hoverfly. 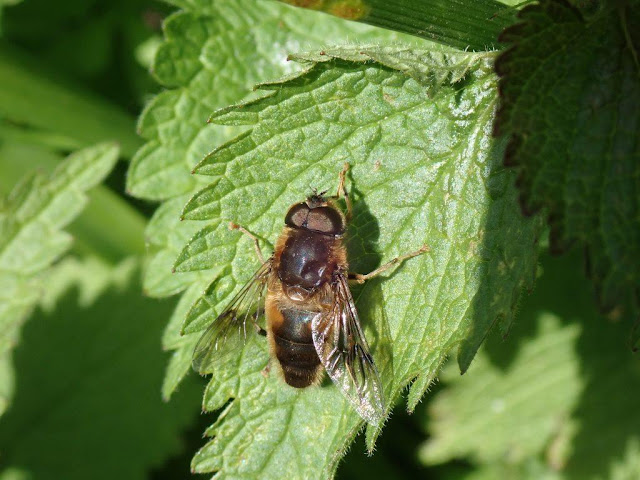 30. "Parsley Cheilosia" Cheilosia pagana - I netted this hoverfly in the back garden and keyed it under a microscope. It's a common species but not one I'd identified at home before. Another common name invented by Steven Falk, on account of larvae having been reared from the roots of Cow-parsley, which is indeed common in the garden (and I should have listed it by this stage...)

31. Common Earwig Forficula auricularia - a few disturbed in the soil whilst weeding. This male was scurrying around with a Notiophilus beetle which I haven't identified yet to species. 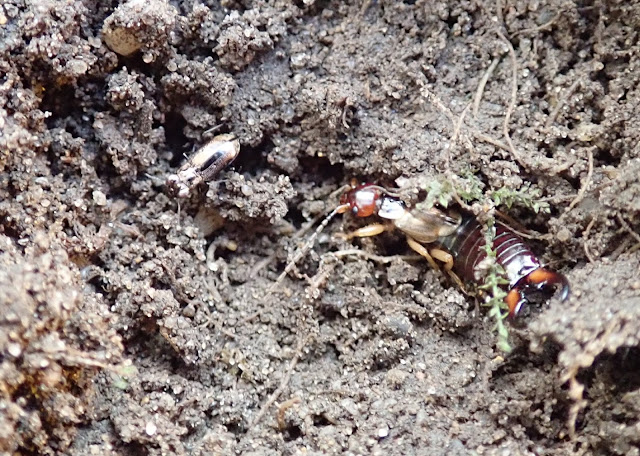