117. Grey Heron Ardea cinerea - one flew down the common; not sure where the nearest nesting colony is, but they're regular along the stream here.

118. Bullfinch Pyrrhula pyrrhula - a least one pair are being their usual spring nuisance self, eating all the buds off the apple and cherry trees. I love their muted calls though, not to mention their looks, so we'll forgive them.

119. Collared Dove Streptopelia decaocto - a pair prefers to hang out at the nearby pub, but wanders over to see us every now and then

120. [A picture-winged fly] Tephritis formosa - small fly with jazzy wings in the back garden. I assumed it would prove to be T. neesii, which hangs around the abundant ox-eye daisies, but it proved to be formosa on closer inspection. This species lays its eggs in the sow-thistles Sonchus which should become apparent in the garden quite soon. 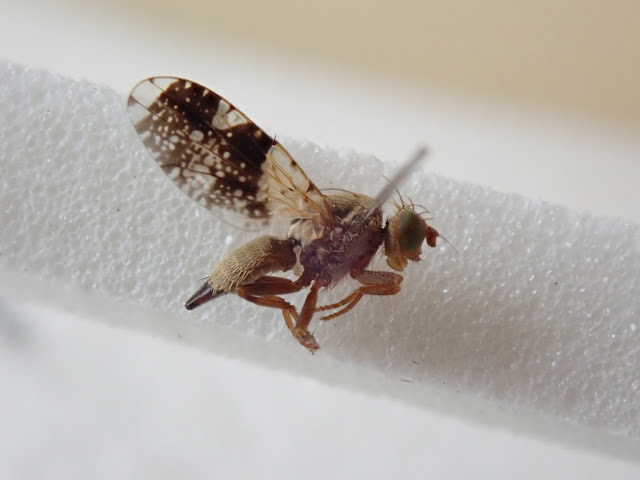 121. [A non-biting midge] Psectrotanypus varius - small fly also with well-patterned wings, netted in the front garden. I keyed it to the family Chironomidae and then Tony Irwin kindly put a name to it online. Apparently not often recorded, but presumably common enough. 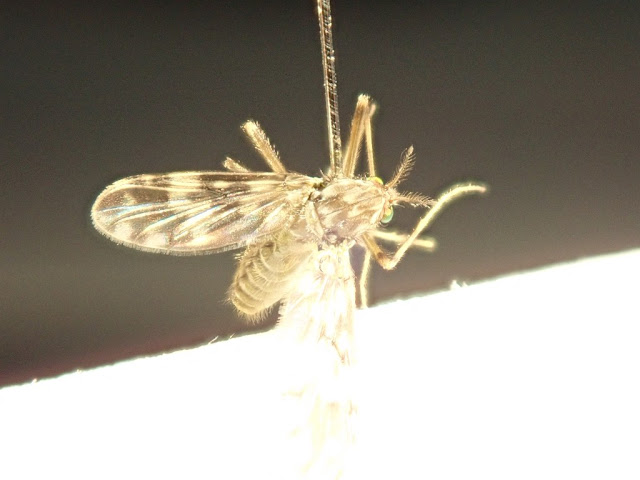 122. Nettle Ground Bug Heterogaster urticae - quite a distinctive bug once learned, and common around nettles. Today's was found basking on a sunny wall.

123. [A rove beetle] Tachinus subterraneus - a new one for me, found sat on a leaf in the front garden. Rove beetles are a hugely diverse group, with over 1,000 species in the UK alone. 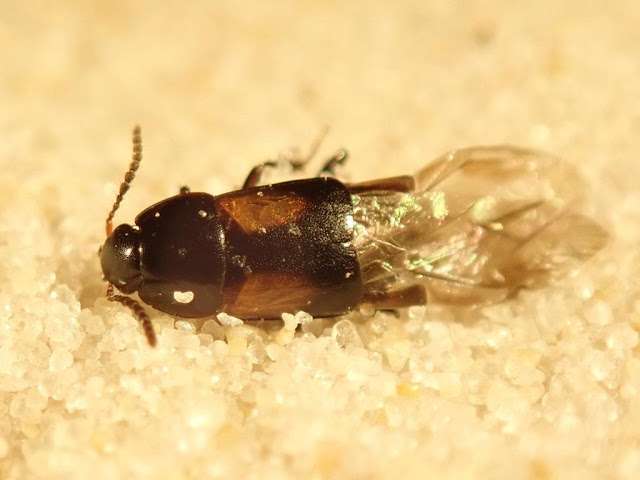 124. Comma Polygonia c-album - I'd been a bit slow off the mark this year with butterflies compared to other people, but always great to see your first sun-basking Comma 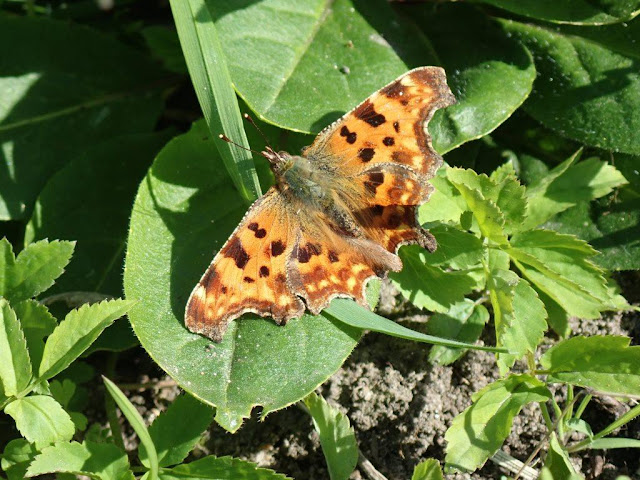 125. Peacock Inachis io - second butterfly in a few minutes, this one didn't stop for its photo to be taken

126. Green Alkanet Pentaglottis sempervirens - another plant that was presumably initially a deliberate planting, but is now rampant across much of the garden and the front verge. Bees and bee-flies love it though. 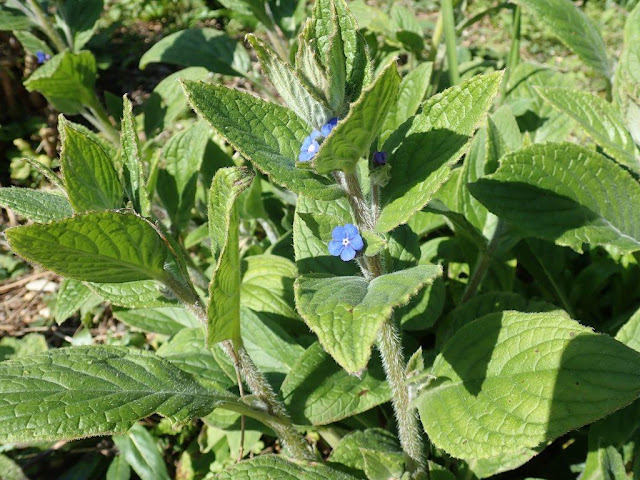 127. Hazel Corylus avellana - just a few small ones in the garden

128. "Hazel Big Bud Gall" Phytoptus avellanae - easily overlooked until known, these expanded buds on hazel are due to congregations of this tiny mite, which cause the formation of this gall (i.e. atypical plant growth stimulated by another organism). The mites aren't much to look at, believe me. 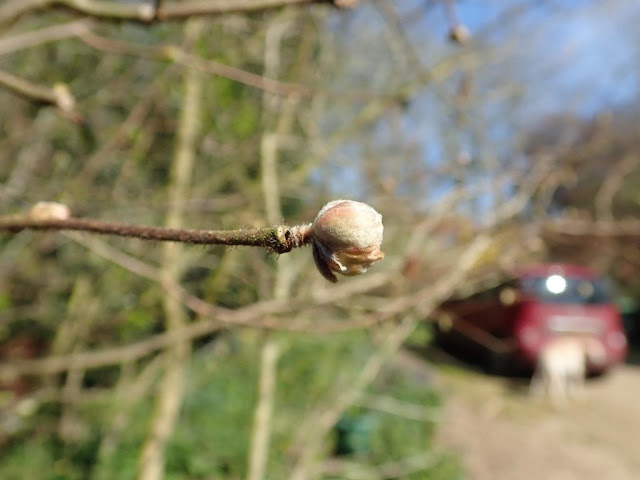 129. Sweet Violet Viola odorata - several plants growing around the front garden, appearing under their own steam. Note the rounded sepals. 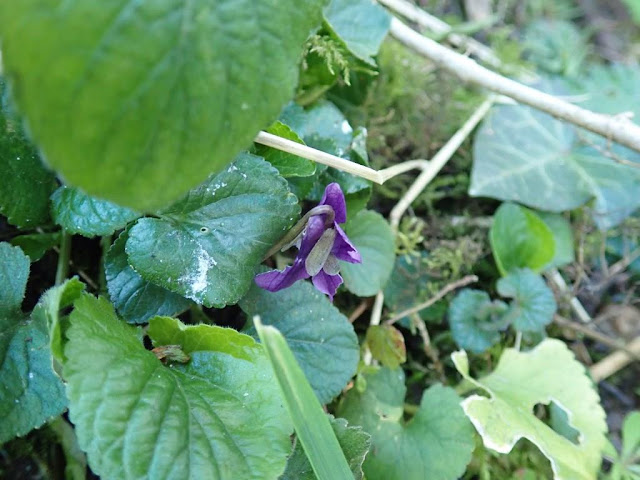 130. Yarrow Achillea millefolium - unobtrusive leaves spotted on the front verge this morning as the dog and I left for our permitted exercise

131. Holly Blue Celastrina argiolus - one flew through the front garden during a brief sunny coffee break

132. Horse-chestnut Aesculus hippocastanum - a few "self-seeded" (i.e. from conkers brought back) plants are growing around the garden, their sticky buds now apparent.

133. [A muscid fly] Eudasyphora cyanella - one netted in the garden, superficially like a greenbottle but this is from a different fly family (you've got to look closely at specific groups of bristles...) 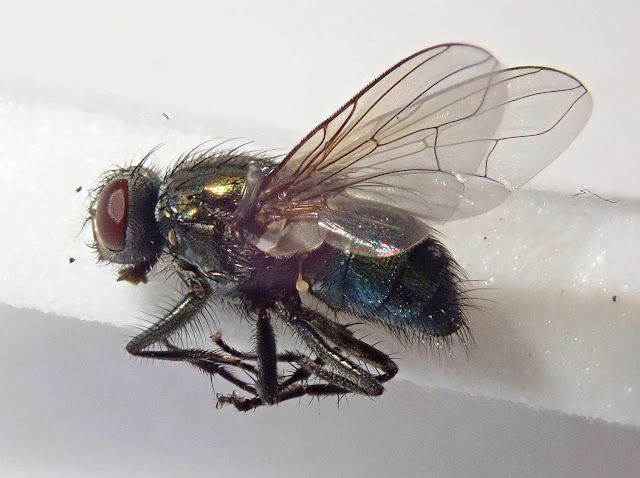 134. Short-fringed Mining Bee Andrena dorsata - male netted and examined closely. One of quite a range of solitary bees that occur in the garden.

135. Green Shield-bug Palomena prasina - a common shield-bug on a wide range of trees and shrubs. 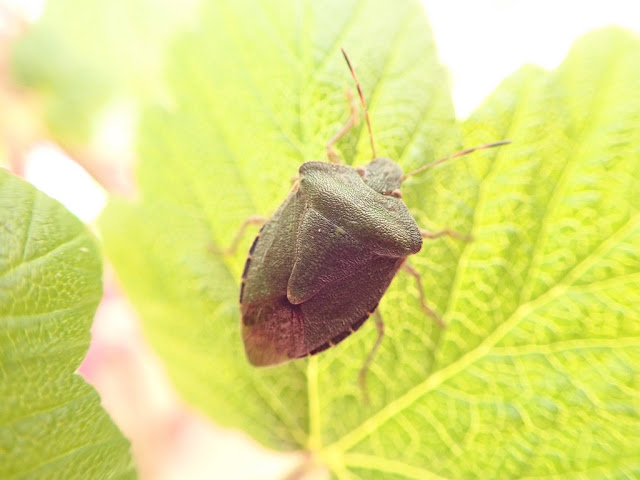 136. Hawthorn Crataegus monogyna - several in the front hedge and elsewhere, important for a range of other species.