Disappointingly cold today. I did venture down to the wilds of the roadside verge, but my pics were so poor in the dull weather that I had to make a return trip a few days later to get some better ones (that I've slotted in below where possible). Quite a few plants still unidentified too, which I will try to remember to return to over coming weeks. I also had a quick look under one of the logs in the woodshed, which I've been procrastinating about - lots to find in there but just a few added today.

158. Annual Meadow-grass Poa annua - I've keyed small grasses of this ilk before around the garden at this time of year and they always turn out to be this. Looks superficially the same at least, so we'll have it. 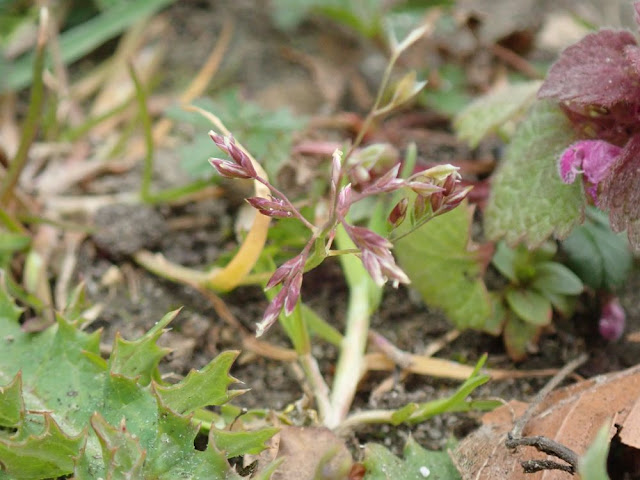 159. Creeping Cinquefoil Potentilla reptans - very common on some road verges around here, although easily overlooked. Worth checking later for the leafmine of the sawfly Fenella nigrita 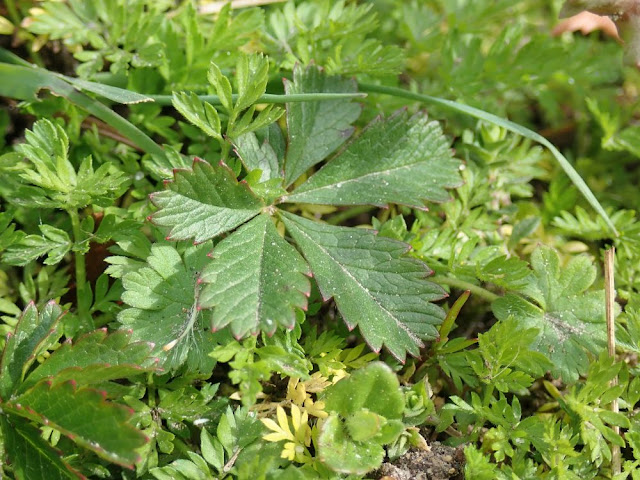 160. Dove's-foot Cranesbill Geranium molle - a common small flower along roadsides, very similar to Small-flowered Cranesbill but with up to 10 anthers on the stamens (not just 5) and distinctively haired stems. 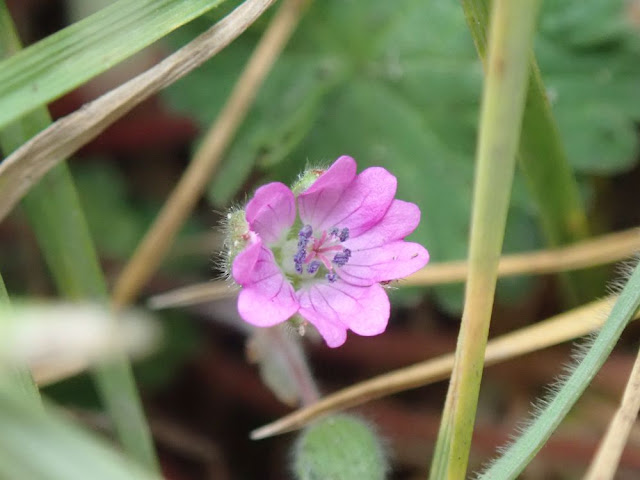 161. Shepherd's-purse Capsella bursa-pastoris - very common in weedy places, best identified by its fruits as the form of the plant itself can be really variable 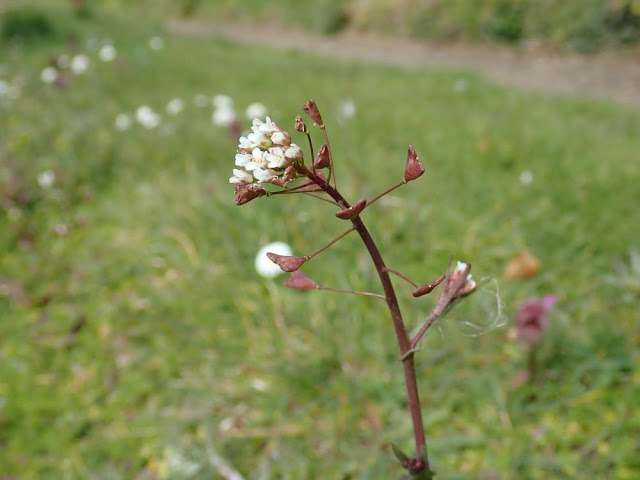 162. Ribwort Plantain Plantago lanceolata - one of the most widespread plants in the world I believe, and it's here in the garden too. 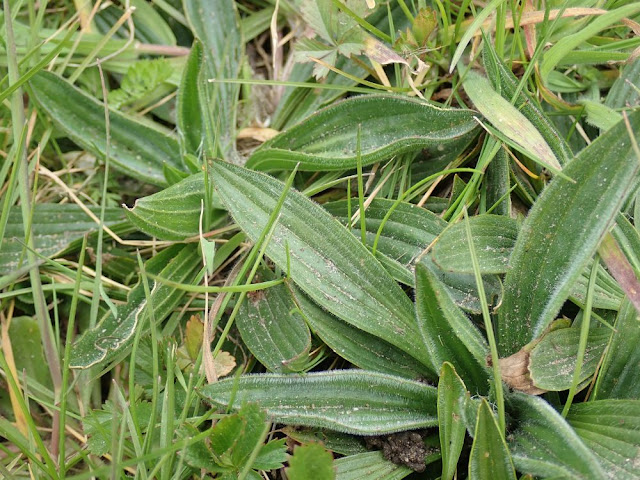 163. Daisy Bellis perennis - one of the most widely recognised wild flowers in Britain surely 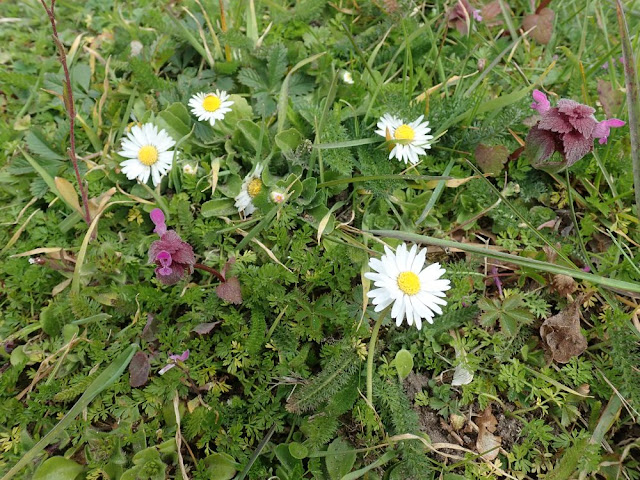 165. Cherry Plum Prunus cerasifera - another of those "probably shouldn't list it", presumably planted deliberately as part of the hedge at some point. But well-established and feels sort-of wild. Cherry Plum is closely related to Blackthorn but the flowers come out a tad earlier, and at the same time as the leaves start appearing. Blackthorn has the flowers first, leaves later. 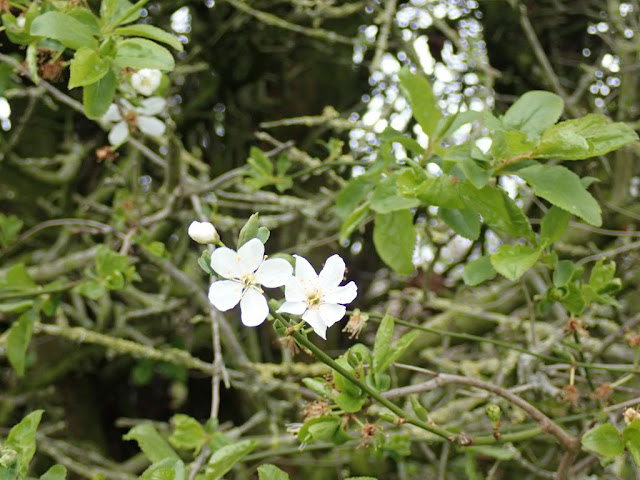 166. "Elder Aphid" Aphis sambuci - I found this mass of black aphids on an elder along the drive. Of the elder-specific aphids, this is the black one. I understand that it's possible it could be a polyphagous species also in theory? I've keyed this species more carefully previously around here, so it does seem likely. 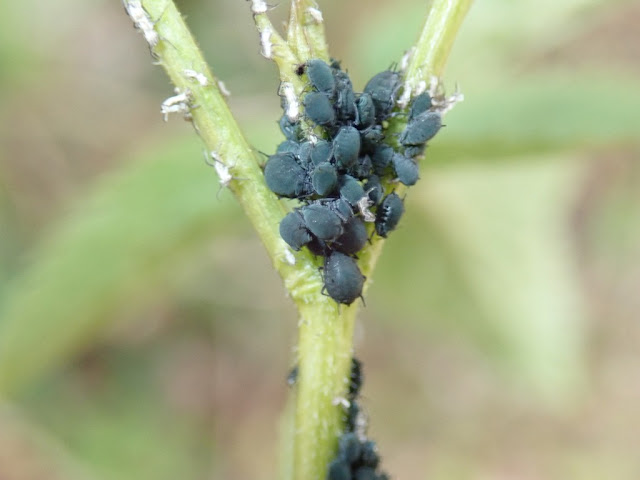 167. White Stonecrop Sedum album - growing on a pebbly bit of the drive. The main concentration of this in the garden is on the flat roof above the front door where it grows below a House Martin nest, and I assume the droppings make quite a hostile environment for other plants. 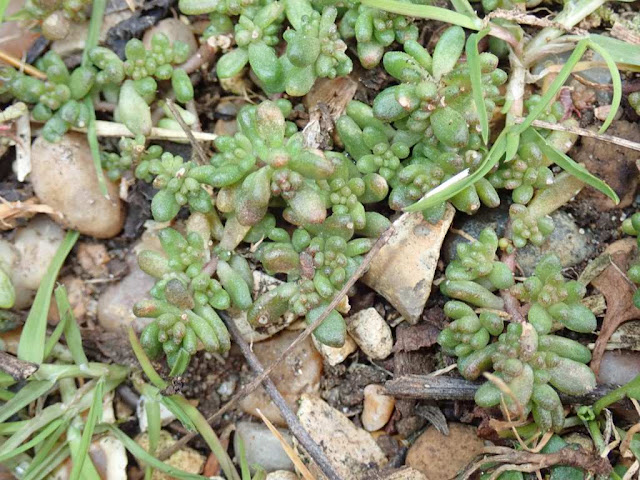 168. [A ground beetle] Platyderus depressus - on the face of it, quite a non-descript medium sized carabid beetle, but I've keyed this around the house several times before and recognise it these days. Brown, with a slightly foreward-projecting centre to the pronotum.

169. Strawberry Snail Trochulus striolatus - on the wall by the woodpile. I do find snails annoyingly difficult to feel confident about, but think this is common in the garden.

170. Common Cryptops Cryptops hortensis - a centipede with 21 pairs of legs, which helps narrow it down to just a handful of species.

172. Common Striped Woodlouse Philoscia muscorum - one of the five common woodlice that can be found in most locations